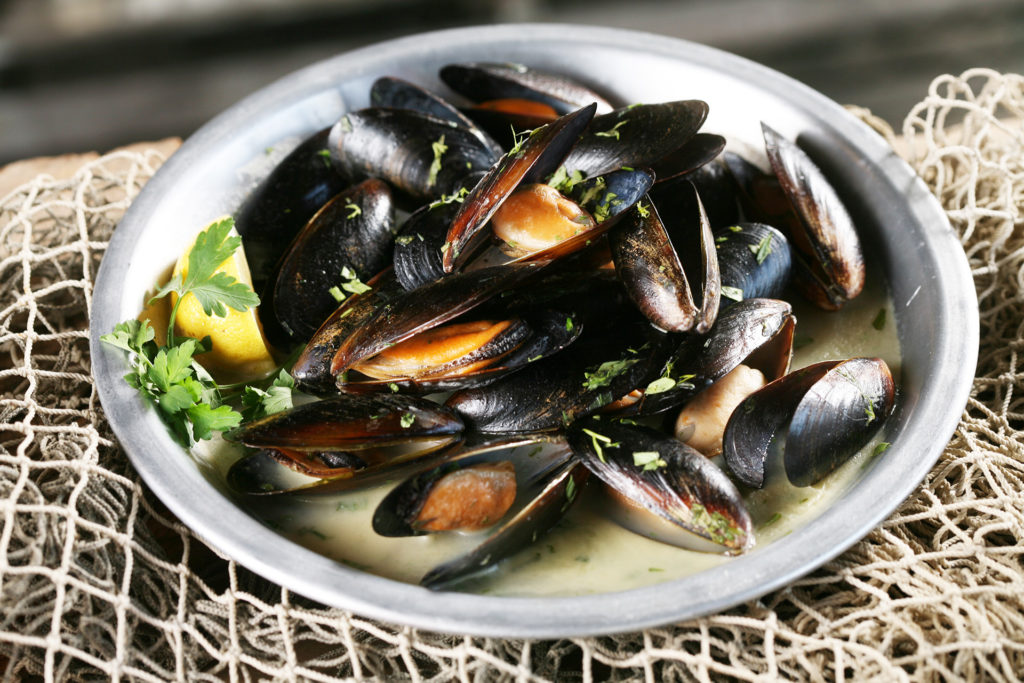 If you are someone who has never eaten mussels, I imagine you are curious why someone would. They look a little weird, they may not be the easiest to cook, and some people are turned off because they think they are oysters. But these tasty morsels from the sea are quite delightful to the palate. Let us explore mussels!

Mussel is actually the common name used for members of several different families of bivalve mollusks from both freshwater and saltwater habitats. They have several common features like a shell whose outline is elongated and asymmetrical compared to other edible clams, which are more rounded or less oval-shaped.

Mussels have been cultivated for centuries. Spain has been an industry leader for most of the time that humans have consumed mussels. They have become increasingly popular in North America since the 1970’s. The northeast and northwest regions of the United States boast the most significant aquaculture operations. Those regions are known for their Mytilus Edulis or Blue Mussel.

Hopefully, by now you are starting to at least wonder what a mussel tastes like. I once heard them described as “chicken of the sea”, but to be honest, as much as I love chicken, that feels like a slap in the face to seafood. To me, mussels taste like the sea. They are tender but slightly chewy, but full of that “sea” flavor. They are mild but delicious.

Mussels are absolutely a star of any dish. You will frequently find them served with vegetables like pickled mushrooms, leeks, or even a fennel salad. It is also very common to see them served with a starch. Something like crusty garlic bread, pasta, or potatoes. Mussels are also commonly served in a sauce. It is common to see a white wine sauce, spicy tomato sauce, aioli, or even a horseradish cream.

From a nutritional standpoint, mussels follow along with most other seafood. They offer low caloric intake per ounce consumed but are high in sodium and potassium. They are a low carbohydrate, but offer no fiber, yet are very high in protein. They are an excellent source of Iron and Vitamin C and Magnesium. All in all, one could argue that mussels are good for your health.

To make your own mussels, you will need to know how to make the sauce. We recommend using a white wine sauce as we do. The broth is super flavorful, goes really well with salty mussels and even French fries. It is relatively simple to make. Simple, not easy, but with some practice, you could master the art.  You start by sautéing shallots and garlic in butter or oil. Then add bay leaves, black pepper, and white wine. Once it starts to reduce, add in the mussels. We suggest you just throw the shell in as well for added flavor. Wait a few minutes and then add in some heavy cream, lemon juice, and parsley. Then EAT! You could even pour the sauce and mussels over some perfectly cooked pasta.

Not sure how to purchase mussels? Never fear, it is almost as simple as making the sauce. Mussels should have a briny smell to them. They should smell like the sea. If they smell bad, go somewhere else. The shells should be closed. If the shell is open, tap on it. If it closes, you are good. If it doesn’t move, don’t buy them. Don’t buy them if the shell is cracked. If you’re shopping more than a few minutes away from home, put them on ice for the trip.

Are you interested in an even easier way to try mussels? Come on over to Bubba’s Fish Shack. We are experts at a delectable white wine sauce, and cooking mussels. We will treat you to some of the best seafood in Surfside Beach, a beautiful view, and amazing customer service. With a full-service bar, we have some pretty special local drinks to pair with your meal. We promise the perfect dining experience.